Optical transceiver manufacturers are heavily investing in developing high-channel count transceivers that can keep pace with the rapidly growing throughput demands for bandwidth-intensive applications such as data centers and artificial intelligence devices. If you are a transceiver manufacturer working to develop this new technology, you may have already concluded that your existing R&D benchtop test instrumentation will not be sufficient for production test of these channel-dense devices. However, it may seem risky to invest in a “new” testing method for production in an application space that is rapidly changing, especially since bandwidth demands are projected to double again in the near future, pushing beyond 51.2 Tb/s.

This two-part blog post series explores how new PXI modules are making it possible to execute mixed signal optical and electro-optical transceiver testing using the highly flexible and easy-to-scale PXI platform. This series also explains how this approach will protect your test investment by ensuring your production test system is prepared to efficiently meet your test needs today and can easily scale to meet your test needs tomorrow too.

As you think about your production test system needs, consider this question, do you need flexibility in your test system? If you are producing a low volume of multiple transceiver types, this answer may be obvious as your test engineers are probably spending a lot of time reconfiguring test stations between test runs of different transceivers. With a modular, software-defined manufacturing test platform that can be quickly reconfigured by making software tweaks, you can reduce the cost and time required to change test configurations while also increasing test reliability since the hardware setup does not need to be touched.

At the opposite end of the spectrum, if you are producing a high volume of a single transceiver type, the flexibility to customize your test system on the fly may not be at the top of your production test system feature list. But think about your test system investment long term when considering the need for flexibility; at some point, the transceivers you are producing will end of life. When this happens and you start producing a new generation of transceivers, you will need to replace all your single-function box instrumentation. However, if you are using a flexible test system, you can preserve a portion of your investment by reusing a lot of your existing test platform and reconfiguring it to test your new transceiver modules .

Whether you need to test multiple variants of a transceiver or need to test the same transceiver type a million times, the bulky, closed-box test systems designed for R&D are inflexible and difficult to scale, making them impractical for your long-term production test needs. Instead, highly flexible PXI-based production test systems are now a great option. But it is understandable that manufacturers have reservations about moving to a test system based on the PXI platform since it is a new option for optical testing.

Let’s first review some of the common misconceptions of using PXI that may be holding you back from further exploring this platform for your transceiver production test needs.

Breaking Down the Misconceptions of Using a PXI-Based Test Platform

While PXI is an established technology for production test in many applications such as semiconductor testing, using PXI for channel-dense optical testing is a new extension of the PXI test capability. As with most disruptive technologies, there are several common questions, concerns, and myths about using the PXI platform for optical transceiver production test. Let’s explore these.

If I Use PXI, Do I Need to Program My Test System with LabVIEW?

No! PXI is an open platform and the development and operation of a Windows-based PXI system is not any different from operating a standard Windows-based PC. Besides being able to program the system with LabVIEW and other NI software, you can use the programming software and language you are most comfortable with including Visual Studio, .NET, Visual Basic, Python, C/C++, virtual instrument software architecture (Visa), and the Standard Commands for Programmable Instruments (SCPI). Plus, every Quantifi Photonics’ module comes with remote control examples available in a variety of programming languages, making it easy to start your automation project as soon as you unpack your instrument.

Is It Difficult to Add Modules to PXI?

The answer to this question is not quite as straightforward. While modules sold by some vendors might be difficult to configure, the optical and electrical test modules from Quantifi Photonics are specifically designed for broad compatibility and simplified configuration. Our modules are compatible with more than 1,500 electrical test modules from 70+ vendors, bringing a wide range of integrated optical and electro-optical test capabilities to the PXI platform that were not possible before. Additionally, our modules are controlled through a single user interface that offers all the important controls needed for these tests at the click of a button.

Does a PXI-Based System Cost More than Benchtop Test Instrumentation?

While the up-front capital expense of configuring a PXI-based test system might be more than what it costs to purchase benchtop test instruments, there are several capabilities offered by PXI-based test instrumentation that will reduce your test cost per unit manufactured, which is a key metric to look at when thinking about your overall test costs. For example, with the Quantifi Photonics high-channel density PXI-based PAM4 BERT module, parallel testing with 64 synchronized 29 GBaud channels in a single PXI chassis is possible, which will greatly increase your test throughput. Additionally, the PAM4 BERT module offers extremely low latency, enabling rapid DUT measurements and drastically reducing test time.

Another benefit of PXI-based testing over benchtop instrumentation is that you can perform mixed-signal testing. This means both optical and electrical DUT characterization can be conducted on one PXI-based platform, further reducing the cost of the test instrumentation needed. Plus, when hardware triggering is used in PXI-based multi-instrument systems, test times can be further reduced while increasing test reliability as these measurement events are controlled by unambiguous predetermined conditions and communication delays are eliminated.

In short, with these features together, you can either test more units per hour, reducing operational expenses, or you can invest in fewer test stations and still meet your production demands while reducing your initial capital expenditure. Either way, you will benefit from a lower cost of test per unit.

When it comes to the cost of integration, while it is possible to string together multiple benchtop instruments from a variety of vendors to meet your test needs, it will take a lot more time and money to program this chain of instrumentation to ensure compatibility and synchronization. Instead, since every module in a PXI chassis shares a common clock, synchronizing measurements across multiple modules and/or multiple chassis even, is simple with PXI – saving additional time and money as there is virtually no programming needed to ensure synchronization.

Now that we have hopefully eased any concerns of using the PXI platform for optical transceiver production test, in part two of this post, we will examine how our platform allows you to seamlessly move from R&D to production test and explore how an investment in a PXI-based production test platform can set you up for success as your test needs inevitably evolve in the future.

In the meantime, you can learn more about our new PXI PAM4 BERT here.

Subscribe to our blog to stay up-to-date on our latest innovations in photonics test and measurement. 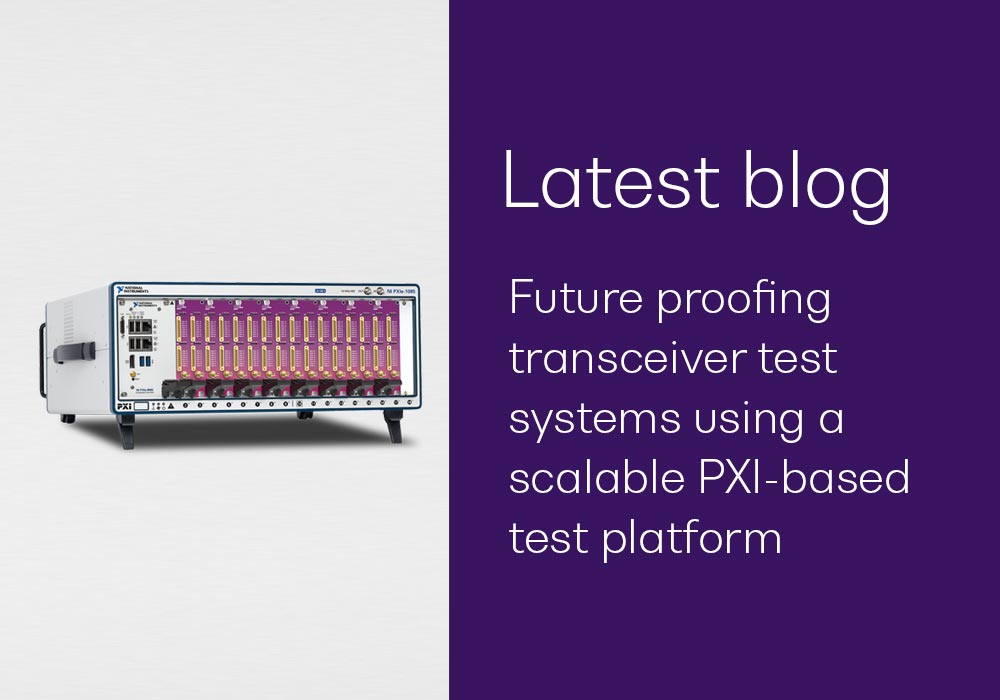